A great read on an experimental assistance program conducted 40 years ago in a Canadian prairie town. A large obstacle to assistance programs is trusting that people will not take advantage of the system. Granted this town does not depict all, it is a good example of how to reexamine assistance programs to aid those in need and help them grow out of poverty rather than give them an excuse to stay in their current circumstances. Zi-Ann Lum did a great job at bringing together the human side of the story and shedding light on an experiment the world forgot.

One woman called to say she remembered the Mincome project. In the early 1970s, she was a single mother raising two girls on welfare – then called Mothers’ Allowance. She said she had always been treated respectfully, but there was one thing case workers said that bothered her.

When the opportunity to transfer from Mothers’ Allowance to Mincome came along, the woman took it. With no restrictions on how she could spend the money she was given, she signed up for training and got a part-time job at the local library which eventually became a full-time career.

“So when I talked to her, she was incredibly proud of having modelled a different kind of life for her daughters,” Forget said. The retired librarian invited Forget to visit her home. Inside, she was shown pictures from her two girls’ graduations, mother beaming with pride.

Original Post on HuffPost Politics:
This City Eliminated Poverty, And Nearly Everyone Forgot About It by Zi-Ann Lum 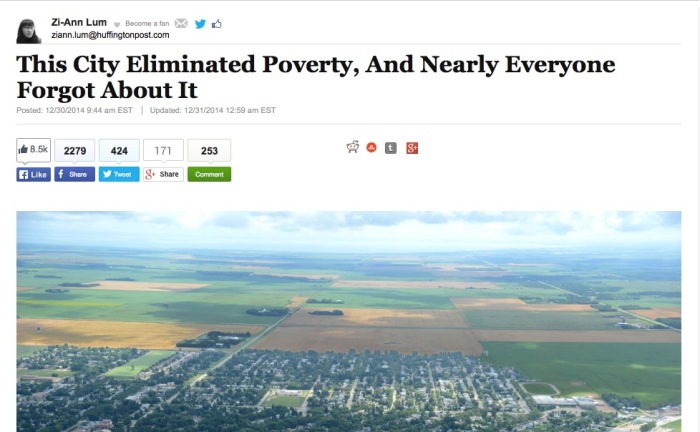